The Andean Flamingo is one of the least commonly found flamingos in the world today. It is the only flamingo found to have three toed feet, and legs that are yellow in coloration. Their beak is a black and yellow color, and it has the curved features that all pictorial representations seem to have. While they are fairly common in the Andes and wet-lands of Peru, they are presently vulnerable to extinction.

As previously mentioned, the Andean flamingo is the only one of its kind to have three-toed feet, perfect for standing in the shallow waters that is its primary habitat. The legs are a yellow hue that would be considered pale by most. The Andean flamingo is a fairly lithe bird, and they can stand as tall as 3.5 feet. This also gives them an advantage while feeding in the shallow waters of wetlands.

As with most flamingos, Andeans are born almost entirely white, but as they mature, they turn a distinct pink color. This is because of the high beta-Carotene diet that comes from most of their prey. A fully mature male can get as deep of coloration as “hot pink” to a deeper pink color. Most females stay molted with a little bit of white. It is unknown if this is due to the female eating less than the male, or simply natural coloration.

The beaks of the Andean flamingo are a black and yellow color, yellow closest to the face, descending into black as you get closer to the tip of the beak. The beak is hooked, to aid in hunting at the bottom of shallow waters, and filter feeding.

While the Andean flamingo is most commonly found in the Andean wetlands, high in the mountainous regions near Chile, Argentina, Peru. While they may be localized to these areas, the Andean flamingos are highly migratory, and can travel up to seven hundred miles in a single day. While it is migratory, it can usually be found in an area containing high quantities of plankton and invertebrate life.

While the migration patterns of the Andean flamingos are largely unknown, they are known to break in the Andes Mountains and the wetlands around them, but have moved to the Chile and other less arid climates dependent on the season. The salt-flats of the Andes may be unsuitable for this type of life in the winter time, because it is highly arid, and the life that they normally prey on is more difficult to find.

These birds traveling in flocks numbering in the hundreds, thousands, or even tens of thousands. They are largely active during the day, sleeping at night in trees and even standing on one foot to sleep comfortably in the water while they feed. They are mostly friendly animals that work well in groups, and the only known instances of these animals fighting are over a suitable mate. The rituals involved in mating include fighting with other males with their feet and beaks, and showing dominance though size and certain “dances”. 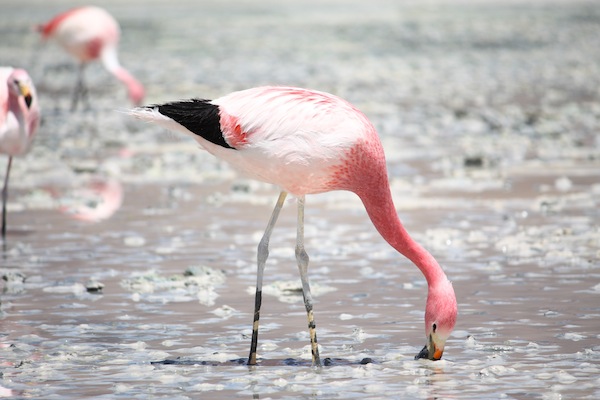 The way the Andean flamingo ingests its food is both interesting and amazing. Their bill allows them to take in the larger sea creatures that they commonly eat, while expelling water without swallowing it. Their most common food source is known as the diatom, a nutritious form of plankton that frequents the bottom of lakes and rivers. The bill filters out all of the unnecessary or unwanted minerals, such as the rocks that tend to float around in the lakes.

The Andean flamingo is a forager, meaning it will eat anything that it can properly digest. Its total diet is not fairly varied, including the diatoms, algae, and small particles.  They are also known to eat some underwater plants, mostly the vascular varieties, but they are known to also gorge themselves on the smaller plankton species.

Another interesting component in the eating habits of all flamingos is they tend to follow the scavenging methods of whatever flock they are currently flying with. For example, the Chilean flamingo tends to hunt in deeper waters than the Andean, but if an Andean flamingo comes upon a flock of the Chileans, they will adopt the exact eating methods of their Chilean counterparts, working as a team, and almost inherently knowing how to dive deeper than the species would normally.

The Andean flamingo reaches sexual maturity at anywhere from three to six years of age, about the same amount of time it takes them to achieve their full pink coloration. The breeding period is usually in December, to January, when the migration has ended, and the birds have settled to their winter habitat. The breed like a colony and a group may have flamingos from up to four different species. The smallest breeding colonies observed are no smaller than fifty.

An Andean flamingo nest is made mostly of collected mud ovoid’s, where the birds collect the mud in their curved beaks, and stamp it down into roughly circular areas. The flamingo will then build a large “moat” around the nested area. It is unknown why they do this, but it is speculated that the moat area is for protection against ground dwelling snakes.

The Andean flamingos lay only one egg at a time, and generally takes about twenty-seven to thirty-one days to incubate. Both parents protect the eggs during this period. A newly hatched flamingo is an awkward creature that has to spend ten months just getting used to fending for itself and walking properly. A group of chicks is generally protected by just a few adults, and the group of chicks may number in the hundreds. The adults feed the chicks off of their “crop milk”, a chewed mass of semi-digested food that is rich in nutrients and vitamins to increase the growth rate of the chicks.

The Andean flamingos are monogamous, and it is speculated that they take mates for lifelong periods. Mated pairs have been spotted and tagged together for several years at a time.