Anatomy of an Okapi 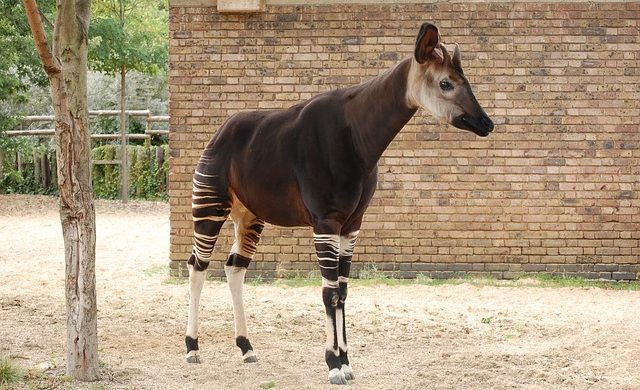 The Okapi (Okapia johnstoni) is a reserved, cud-chewing mammal native to the Ituri Rainforest of the Democratic Republic of Congo. This small pocket of Central African land is also the only remaining habitat occupied by the species in the wild. While resembling the zebra and horse in appearance, the okapi is actually one of the last few descendants of the giraffe, hence its nickname,” forest giraffe.”

An okapi is typically about 1.5 meters tall and 2.5 meters long, its tail comprising roughly 42% (around 30cm to 42cm) of its total body length. Its weight ranges from 200kg to 350 kg, and compared to other ruminants, it has bigger, more flexible ears. The color of its coat, while primarily reddish-brown, depends on the specific body area it covers.

For example, its hindquarters and legs have brown and white stripes that give it a zebra-like appearance. Its ankles are covered in all white, and its cheeks, throat, and chest can be a dull silver or olive-brown. Besides having a marginally redder coat, female okapis are also slightly taller and heavier than their male counterparts.

As with other wild animals, the anatomy of an okapi is distinctly designed for survival.

An okapi’s nose holds an olfactory system fit for a king. Put simply, the animal has a very keen sense of smell!

Okapis have a massive number of rods in their retina, giving them excellent vision, even in the dark.

Okapis have big ears for a reason. Parts of their middle and inner ear are covered by a large, hollow, bony structure known as an auditory bulla, which allows them to detect the presence of predators with ease and speed.

The tongue of an okapi is purple black and interestingly 30 centimeters long—long enough to reach its eyes! The dark hue serves to protect the tongue from the sun as it stretches out during mealtime.

As herbivores, okapis eat grass, fruit, fungi, and other plants, as well as clay and burnt charcoal (presumably for their mineral requirements). On top of their long, dark-colored tongues, their low-crowned, finely cusped teeth help them feed safely and efficiently.

Okapis have a large cecum and colon that make them more efficient in digesting microbes. As ruminants, or herbivores that source their nutrients by “ripening” their food in a special stomach before digestion, they pass food considerably faster for lower cell digestion than do other animals in the group.

The feet of this animal have interdigital glands or scent glands, with those at the front being the biggest. These glands secrete semi-viscous fluids that serve a specific purpose, such as to assert sexual dominance, express mood, or, more usually, to mark territory.

The head of a male okapi has a small horn about 15 centimeters long, covered in hair, and tucked below the skin except at the tips. Ossicones do not exist in female okapis, who have hair whorls instead.

The fur of okapis is not only thick but oily too, allowing water to simply glide off. This means the animals can stay warm and dry during the rainy season.

Okapi stripes indicate links to the giraffe family and lifesaving camouflage in the presence of predators and other threats. The pattern basically mimics the appearance of the sun’s rays breaking through the trees. And because these stripes are unique to each okapi as fingerprints are to each human, conservationists use them to help them track the animals’ activities and population growth.

The Giraffidae family is composed of only two species—okapis and giraffes. But as opposed to the giraffe, which has many subspecies all over Africa, okapis have none. While the two seem different beyond their stripes, these animals have significant commonalities that inevitably put them in one basket.

For example, both have long necks, long, black prehensile or grasping tongues, and no upper incisors. Furthermore, these animals possess large palatine sinuses that can only be found in members of the Giraffidae family.

On the other hand, the artiodactyl or evenly hoofed mammals do have their differences too. The giraffe, for example, can grow as tall as 10 feet, while the okapi can only reach a maximum height of 4.9 feet. While okapis have scent glands in their feet, giraffes don’t. Lastly, ossicones only exist in male okapis but in both female and male giraffes.

The okapi is far from an odd-looking mammal, but this forest giraffe—very much a shrunken version of its larger cousin—does keep quite a funny expression on its face. Though technically not part of its anatomy, looking at pictures, the okapi always looks like it’s disappointed in something you did.