The American White Pelican is one of the largest forms of aquatic birds. They are also the species of Pelican that most people are familiar with in terms of their overall appearance. They are believed to be a symbol of peace and good luck in many cultures.

The body of this Pelican, as you may have guessed by the name, is completely white. They have a very round body and a long neck. The bill is a light orange or tan color. They also have some yellow under the eyes. They can range in length from 50 to 67 inches. The bill itself can be up to 14 inches of that size. The overall weight can be from 11 to 20 pounds.

North America offers a very wide distribution location for the American White Pelican. In the winter though they can be found living in areas of Central America that are warm and offer them plenty of access to food. They live never bodies of water and they tend to have very large populations. About 20% of them are found around the Salt Lake Basin in Utah.

The American White Pelican is very social and they can be very noisy when you are listening to a large group of them. They live in colonies that can consist of hundreds of pairs. The numbers though will vary based on the amount of habitat and food that is available to them.

There are plenty of sub colonies that form in the larger one. This helps to keep the order and to keep it from being so chaotic. However, to outsiders including humans those colonies can seem loud and unorganized. Experts have spent a lot of time evaluating these hierarchies but still have plenty of questions about them. 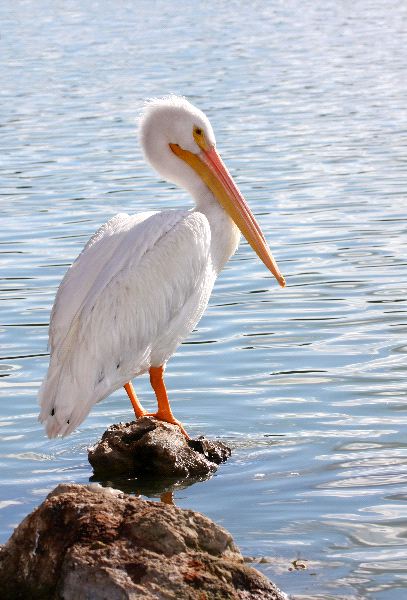 Most people assume that the American White Pelican dives for food since that is the case with other species of Pelicans but they don’t. They actually get their food while they are leisurely swimming in the water. They eat about 4 pounds of food per day. They consume mainly fish but also crayfish and amphibians.

They often nest along saline coasts so they have to travel a long distance for feeding. They often feed in groups though and use effective strategies to get prey to each other. They are also famous for taking food from Seagulls that may be around dining in the same proximity.

During March and April the colonies will move to breeding ground locations. Some of those locations have been in use for hundreds of years. There can be up to 5,000 pairs at any given site. They create a very shallow nest on the ground that each pair will be responsible for. There can be from 1 to 6 eggs per clutch but 2 or 3 is the most common.

Both of the parents take turns with the incubation process which can be up to 1 month. After only about 4 weeks time they are ready to take care of themselves. However, they will remain with their parents until the early part of the fall.

There is a very high mortality rate though in these breeding colonies. Various predators including fox, coyotes, and various birds will try to get eggs and the young that have emerged. The parents will try to fight them off with their bills but they are often injured or killed in the process.

In the wild the American White Pelican has a life expectancy of about 16 years. In captivity though they can live for over 30 years. 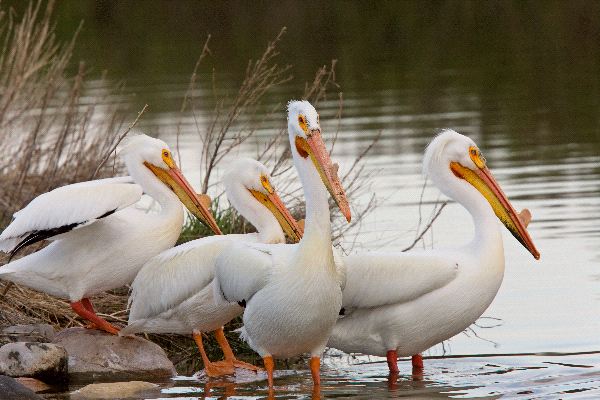