The only flamingo that is known to inhabit parts of North America is the American flamingo, a beautiful and graceful creature that has been depicted in many forms, pictorially and in statuary. They are the most commonly depicted flamingos, and have been a mainstay in popular culture here in America for centuries.

The American flamingo is a deeper pink in coloration than most other species of flamingo, largely due to its increased diet of beta-Carotene rich substances. While they are the largest flamingos found in America, they are slightly smaller than the great flamingos. Standing at about forty-seven inches, they are tall enough to stand above the surface of the waters in which they hunt.

Before they were called the American flamingo as a universal namesake, they were commonly known as the Rosy flamingo, because of the rich and deeper pink colorations around the plume and feathers. The beaks are black at the tips moving toward a white coloration near the face. Under the wings remains white even into maturity, as well as under the tail feathers. The beak of the American flamingo is scooped strongly to aid in the deeper feeding process. Their legs are a lighter pink than the rest of the body, but the beta-Carotene coloration is still evident even there.

While their namesake suggests that the American flamingos are present in the Americas, they are much more common in the Caribbean and islands surrounding the Southern Americas. While some can be seen in the Florida areas, these are largely considered escapees from zoos or those lost in huge migratory flocks. They most commonly inhabit lagoons, lakes, and mudflats, that while deeper than most areas, are still pretty shallow water sources.

They are highly migratory birds that can travel hundred of miles across international bounds, and can travel in flocks of thousand flamingos. The exact migratory patterns are mostly unknown, but it is speculated that they need to stay in fairly warm climates, as they tend to move during the colder months. The most common migratory paths seem to be due to breeding season.

They may even follow short paths to follow the all-important food, taking trips of one-hundred miles to move to take over a new location that is richer in shrimp and plankton. They do not seem to have singular breeding and mating locations.

The American flamingo is a fairly social creature that will travel in huge flocks during migratory seasons. These flamingos can be extremely territorial when choosing an area to feed, and will sometimes even fight aggressively over feeding grounds. This is uncommon however, as the most common form of territorial fighting is called “bill fencing”, where the flamingos will bash beaks together until one or the other becomes too tired to continue, and leaves. Before this event occurs, a complex ritual of determining who is the biggest, by expanding plumes and wings to make them seem larger, and determine which is the strongest.

Like most of the other flamingo species, the American flamingo will mate for life, mated pairs usually lasting until one of the pair dies, then some will pine until the other member of the pair dies. While the pinning is less common than with other species of birds, it still happens occasionally. Because of the long necks, and the fatigue associated with holding up such a long and slender neck, the American flamingo will lay its head on the body when sleeping. 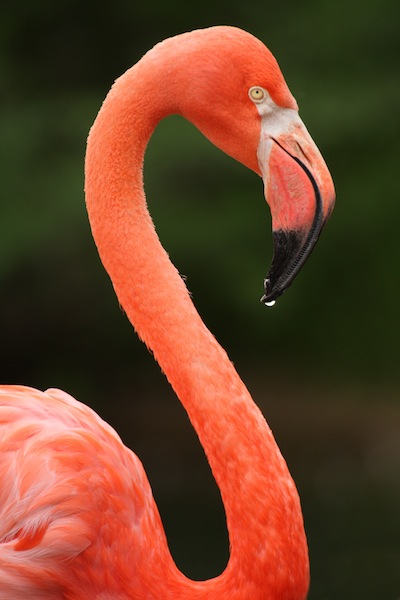 The American flamingos eating habits are probably the birds most interesting characteristic. They use their large feet to stir the sediments at the bottom of their chosen water source. They then use their beaks to scoop up the stirred sediment and plankton, using their filtered beaks to choose the food they need and separate it from water and the stirred up dust and rocks.

Their diets are not very selective, and many different things have been found in the stomachs of dead American flamingos. Anything from bacteria, plankton, underwater plants, vertebrate and invertebrate animal life, and even mollusks and fish have been found in their stomachs. Their coloration comes from their dietary choices, and flamingos kept in captivity are not likely to have the same colors as birds in the wild.

Their tongues are also an important mechanism for filtering the foods that they commonly eat, and is used to pump unused sediment and water from their mouths. The flamingo actually feeds with its head upside down, when underwater, an unparalleled evolutionary achievement. The bottom of the beak is much more useful than the top of it.

The American flamingo is a monogamous creature, meaning the bird chooses one mate during its lifetime, and sticks with it until death. They may pine over the death of their mate, but may also choose a new one after the first mate’s death, depending on the disposition of the bird.

The mating process is complex ritual, involving a dance like maneuver that includes lots of wing flapping and noise making. Mating occurs as a colony, no one bird simply choosing it is time to mate. Only the fully mature males can take part in the actual ritual, but the younger birds will generally stand by to watch the ritual. The males will usually do this “dance” in a group.

There is no set time of year that the mating will occur, though it is most common after the rainy season. The female will only lay one egg during mating, and both parents will stick around to incubate it. The incubation period of the American flamingo is usually about thirty-one days. Both parents create mud nests with their beaks and feet, usually creating moat-like areas around them for added protection against predators.

Chicks are reared for the first days, during which time; they create their own social orders known as creches. The chicks are ready to fly at 70-90 days old.