The American Black Bear is one that most people have heard of and seen pictures of. Don’t let the name throw you off though as in some particular occasions they can also be brown when it comes to their coloring. Areas of white on the black or brown have also been identified, but some people think that they are seeing a different type of bear because of it.

The size of the male bears can range from 130 pounds to 550 pounds, while females range from 90 to 370 pounds. The overall size often depends on what part of America they happen to live in, but most of them are 120 to 200 cm when they are full grown. This means that they can reach up to 6.4 feet in height when they stand upright.

The design of the body allows these bears to move extremely fast. Never think you can outrun one as they have been clocked at up to 25-30 miles per hour. They have a head that is much larger than other types of bears. They are very powerful due to their stocky build. They have curved claws that allow them to be able to capture prey, to remove bark from trees, and even to climb.

The fur of the American Black Bear is short but it still offers them plenty of protection. You can’t see the second layer that they have which offers a barrier between their skin and the fur. This helps to keep them at a good body temperature. It also helps to prevent them from getting wet.

American Black Bears have a fine vision and hearing. Their sense of smell is extremely good which is considered to be 7 times better than the sense of a bloodhound dog. Black Bears can travel miles in search of a prey they have detected.

It is also believed that their diverse locations are due to the fact that these animals choose to consume plant live when they couldn’t get to meat sources. This type of evolution still accounts for a great part of their diet today. 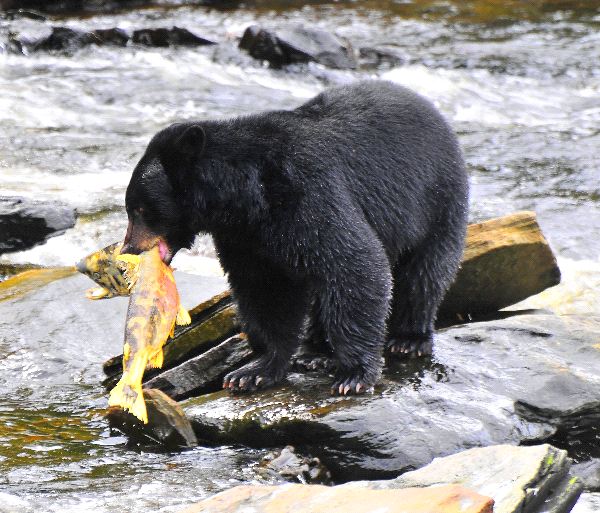 The early morning hours and night time are when you will find these bears eating and roaming around. It is very rare that they are out and awake in the middle of the day. They tend to find shaded areas where they can sleep when the sun is hot.

There tends to be more instances of these bears being spotted in unusual places as fall approaches. That is because they are looking for more food so that they can store fat for the winter months that are coming up. With their nature environment being stripped away in many areas this scenario is becoming all too familiar.

Like most types of bears they do take part in hibernation. However, it is a cycle where they are continually interrupted. They can sleep for days or weeks, venture out, and then repeat the cycle several times.

The males are very territorial and they don’t put up with other males coming into their territory. They are fine with females coming when their areas overlap, but only in times when they do have enough of their own food. Females seem to be able to identify those other females that are related to them. Females are highly territorial and may become aggressive towards unwanted visitors in their territory.

The American Black Bear is able to adhere to conditions in many environments. As a result you can find them living just about anywhere that there are plenty of trees. There they can find shade, food, and places to hibernate.

American Black Bears have been known to also live in the mountains though and throughout the plains. In some swampy areas you will also come across the presence of these bears.

Throughout the United States, Canada, and Mexico the American Black Bear is the most common type of bear you may find around.

These bears have a huge appetite and they aren’t picky when it comes to what they will eat. Depending on the time of year they will feed on a variety of fruits and berries. They will also search for nuts that they can consume. Grass, leaves, and tree bark are also part of the diet. They do love sweets such as yams and honey when they can find it.

They are also meat eaters so don’t be surprised to learn they will consume small animals that come along. When they need to, they will also kill very large types of animals. This includes deer and elk. Should these bears be close to ranches they have been known to consume animals from there as well.

The American Black Bear definitely has an interest in what we call people food. If they can get their hands on what hikers, campers, or people living in a close proximity have available they will. This is one of the main reasons why people have come into contact with this particular type of bear. It seems once they have found it they will go in search of it instead of consuming their normal types of food.

Sometimes what the American Black Bear consumes can lead to serious health issues for them. They will consume just about anything that they can find. When their normal foods are scarce they will do so even more. Some very strange things have been found in the stomachs of these bears. Among them are shoes and clothing which is where many false stories of them eating people stem from. 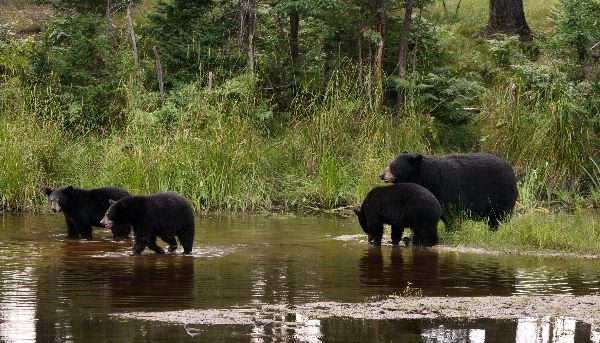 The mating season for these bears is in the late spring and early summer part of the year.

What is very interesting is that the females are able to delay when they embryo will start to grow in their bodies. It won’t attach to the uterus until the fall and then the young are born either late January or early February. This will likely occur while she is hibernating.

She will likely have two cubs but there are rare occasions when up to five of them are born at a time. She will do all she can to care for them for the first year or year and a half of life. Then they will venture off to make their own home territory and to care for their own needs.

Due to the smaller size of the American Black Bear, it is often the victim of other types of bears that share the same habitat. They may be consumed as food from time to time but often it is just a matter of eliminating the competition for food out there. During mating season death of the weaker males occurs due to them fighting with stronger ones to be with females.

The American Black Bear is one that people will commonly find in the wild due to a population of almost 400,000 just in the United States and even a few more than that in Canada.

Legal hunting seasons are offered in many areas to help keep the population under control. Other times though the hunting of them is illegal in nature. These are smaller sized bears so often they are hunted by those that are less experienced. They also are illegally trapped and then sold for pets or to train in various types of activities.