The American Bison is often called the Buffalo. They are enormous animals that once roamed the plains in very large numbers. The Indians relied on them for food, to use the hides for clothing, and their bones to make tools. The white man came along and slaughtered them and they were near extinction. They are considered to be the largest of all land Animals in North America.

The American Bison is a very large animal with a thick hide. Their hair is short and very curly. It is a chocolate brown color with darker brown or black at the top. They have a hump that is behind their shoulders and they are very powerful animals. They have horns that are short but sharp. They use them for digging as well as for fighting. The males can be more than 6 feet tall and weigh up to 2,200 pounds The horns can be up to 2 feet long for the older ones.

Today there are limited locations where the American Bison roams. Most of those locations are National Parks where they are well protected from hunters. There are some commercially raised those to provide a source of meat. Buffalo burgers and other meat options are considered to be better for the body than meat that comes from cattle. There are about 500,000 of them that are on such ranches.

Most of the time the American Bison is very timid and calm. However, they will attack each other to show dominance or to fight for food. The males can be very aggressive during mating. The females may be aggressive if they feel that their young are in danger. The American Bison live in large herds so they have their own levels of hierarchy that can be very complex.

The males generally will leave the herds when they are about 3 years of age. They will come back when it is time for them to mate. The females live in maternal herds with their young. 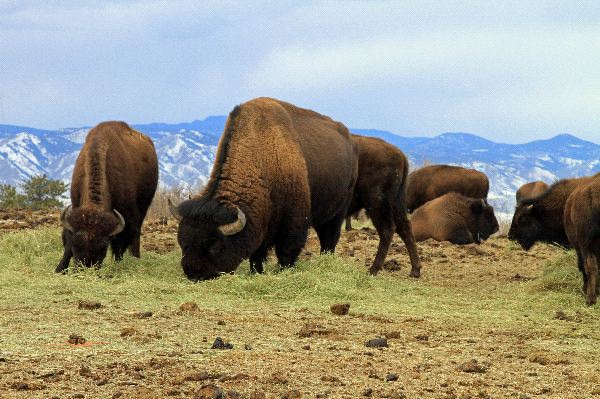 The American Bison is considered to be an herbivore. They are grazers and will consume large amounts of grass. They usually will feed for two hours, rest, and then chew on cud that they create. Then they repeat the cycle again and again. They continually move around to new locations to feed so that they don’t deplete any given area of the food resources found there.

The American Bison roam around to follow the growth of the grasses for the various seasons. Since the Indians relied on them for food, they also were nomadic, following the herds. They only killed what they needed and they used the entire animal for various things to aid their survival.

August and September are the months when mating occurs for the American Bison. The gestation period is about 285 days long. They give birth to a single calf that will nurse for about a year – until the next calf is born. They are considered mature for mating when they are about 3 years old. Their life expectancy is from 15 to 25 years.

Thanks to sincere conservation efforts, the American Bison continues to be on Earth today. They are still considered Near Threatened. There are about 15,000 of them on an open range in North America. One of the biggest problems though is that there is a lack of genetic diversity offered with them. The low numbers often result in them breeding too closely to their own bloodlines.

To help with this there are various breeding programs that ensure there is more diversity among the American Bison. This is one way to ensure that they have the healthier genes for survival.