The Boto Dolphin is a common name that the Amazon River Dolphin is known by. It is one of the few dolphin species in the world that is able to live in the water. There are plenty of legends that surround it too in the Amazon history. One of these myths that has been around for a very long time is that they change into men that want to seduce young women that are in the river at night.

This dolphin species has a very long body and they feature paddle like fins. They don’t have a dorsal fin on the back but they do have a ridge in that location. The bulging part of the forehead is the melon. They have very chubby cheeks and they have small eyes. The flukes are broad and shaped like a triangle.  They can have up to 140 teeth and they feature a long beak.

They can be gray, blue, or white in color. They may be pink in some areas as one. One of the unique features of this dolphin is that they have a flexible neck. That is the result of some of the vertebrae in the neck not being fused. They can move their head in more directions than any other dolphin species.

The Amazon River Dolphin is also the largest of those that live in the rivers. The males are larger than the females. Males can be up to 8 feet long and for the females they can be about 7 feet long. The males can weigh close to 400 pounds with the females around 330 pounds. Their body allows them to move through the trees and other items in their habitat that may be found in a river.

The basins of the Amazon River and the Orinoco River is where you will find these dolphins living in the wild. If you aren’t familiar with these rivers, they are located in South America. They are able to live up to 1,865 miles from the shoreline which is very amazing. They are found in many locations out there including Peru, Guyana, Bolivia, Ecuador, Bolivia, and Columbia. The distribution for them is about 7 million square miles.

However, the environment they live in that is provided by the rivers can create limits for them. They may not be able to get around waterfalls in some areas. There are also some parts of the rivers that prove to not have enough water in them for these dolphins to get across them. This tends to section them off into various habitat elements in the river.

Some of them live below waterfalls and others live in channels. There are those that stick to the main river area and those that survive in a river mouth. They tend to stick to areas where they have warm enough water and they are able to find enough food for survival. The depth of the water plays a vital role where the Amazon River Dolphin is able to survive though. They may have to migrate during various times of the year to be able to avoid those locations where the water can get too low. 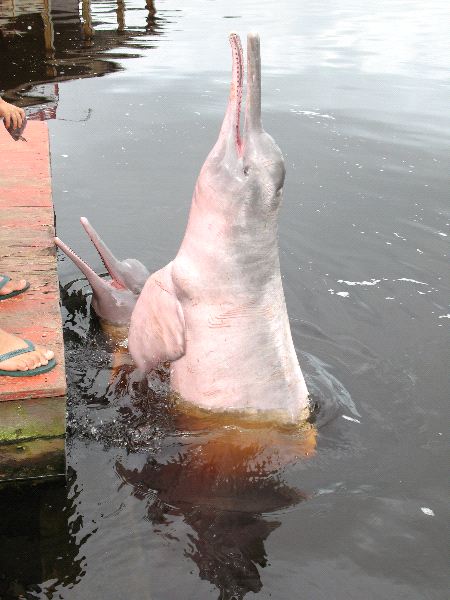 The size of the pods for these dolphins is very low. There can be only 2 members and hardly will there ever be more than 15 members. They are social, but not to the same extremes as the other dolphin species. They do form very strong bonds within their pods with the other members. They are active in the late evening and in the morning hours. The rest of the time they may be playing or resting.

The Amazon River Dolphin also can’t swim as fast as other species. They are very playful though and extremely curious. They aren’t afraid to get close to boats to see them. They have been known to reach out for the paddles of boats too. They roll around; wave their flippers, and more. It is rare to see their fluke out of the water though and they aren’t going to jump. They tend to stay in the waters where they can easily be seen from the surface.

The Amazon River Dolphin is considered to be one of the most playful. They will play with logs, with turtles, and even pull at the grass at the bottom of the river. They can move through some tight locations due to their flexible body design. When they are seen swimming upside down, it is comical. However, it may be necessary to help them see what is below them without their chubby cheeks hindering the view.

The diet for this diet consists of mostly fish but they will also take the opportunity to consume other items too. They are able to find at least 50 different species of fish that they can eat. They will consume sea turtles, crabs, and more when they can’t find fish. When there have been depleted numbers of fish in the Amazon River this has proved to be a problem for the dolphins as their food supply is lessened.

This is the only species of dolphin really known to consistently do their own hunting rather than with a collaborative effort. They consume about 2.5% of their overall body weight in food each day. This is about ½ of what the other species of dolphins need to eat for survival. That lower amount could be part of why they choose to hunt alone.

It also means that they have to use their intelligence to help them get enough food. They often are found at the mouth of the river or under the waterfalls to where they are able to get food without too much difficulty.

The female Amazon River Dolphins are able to mate around 6 to 10 years old. Males are ready for mating around 7 to 12 years old. After mating, it is approximately 11 months later when the calf will arrive. This is usually around July and the time when the water levels are starting to drop and the fish are on the move. It can be 5 years before the female will mate again. In the wild, these dolphins can live up to 30 years. 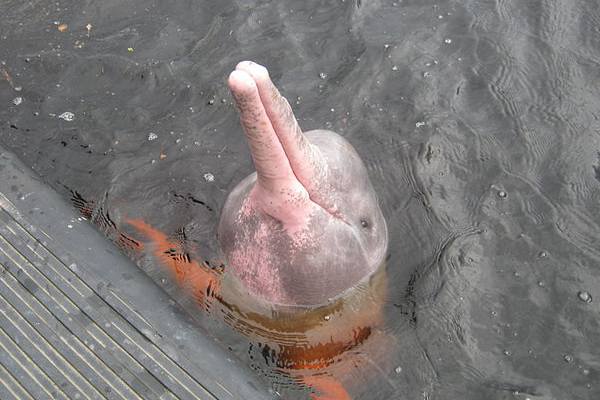 The high levels of pollution in the Amazon River continue to be a big problem for these dolphins. They are vulnerable to disease, chemicals, and loss of food resources due to the pollution. In some areas, the water is now being used for irrigation and hydroelectricity so that has isolated the dolphins from moving into certain areas of the river. It can prevent them from being able to migrate when food is low or when the water in a given area is too low for survival.

There are some laws in place in Brazil and Bolivia that have helped to protect the Amazon River Dolphins. Efforts of a lower degree are in place in Columbia, Venezuela, and Peru. Part of the overall conservation efforts involve the money generated by tourists that come to this area to witness the pink coloring and the behaviors of these dolphins in their natural habitat. With such efforts hopefully their numbers will stop declining.