One of the largest turtles in the world that thrives in fresh water is the Alligator Snapping Turtle. The name comes from the fact that the shell is very scaly like that of an Alligator. The males are larger with a weight of about 175 pounds. They can range in length from 16 to 32 inches with the males being longer. Their overall size often depends on location and the availability of food.

The head of the Alligator Snapping Turtle is very large and heavy. They have three dorsal ridges on their large scales. Many believe that this is a prehistoric look that resembles that of dinosaurs. They are often confused with the Common Snapping Turtle but you can tell them apart based on their shell. They can be brown, gray, or olive. They are often found covered with algae.

They have yellow colors around the eyes that help them to continue their camouflaged look. That combined with the algae allows them to be well hidden even when they are in plain sight.

The Alligator Snapping Turtle is found in many locations around the United States. The common areas are Georgia, Florida, Oklahoma, South Carolina, Kentucky, Missouri, and Texas. They are also known to live in Asia and Europe but that is due to humans transporting them for the exotic pet trade. In Japan there is a huge center where this species of Turtle is breed and research takes place.

The males will typically spend their entire lives in the water. When they are born they will go from the sandy land to the water and stay there. For the females they will stay in the water with the exception of when they go to shore to lay their eggs.

They are usually not aggressive but they can bite if they are afraid or startled. The jaws are very powerful and they can clamp down very quickly. Humans should be very cautious when handling the Alligator Snapping Turtle. 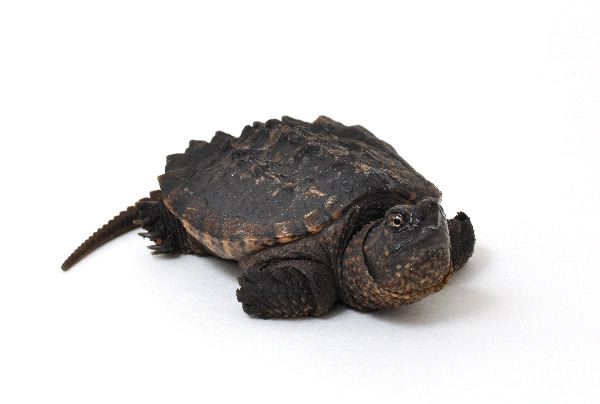 Fish make up most of the diet for the Alligator Snapping Turtle. The inside of the tongue offers an appendage that is very similar to that of a worm. The fish are drawn to it thinking they are getting a meal but they actually about to become a meal. They are both carnivores and scavengers though so they will take just about any opportunity that they can get to feed. Their diet also includes various reptiles and other species of turtles. In captivity they are often feed beef, pork, and poultry.

Mating doesn’t take place for the Alligator Snapping Turtle until they are about 12 years of age. The early spring is the most likely time for them to mate. The female will create a nest on the shore where she puts her eggs. There can be from 10 of them to 50 per clutch. This process takes place a couple of months after mating.

The lifespan for the Alligator Snapping Turtle can be from 20 to 70 years depending on if they are in the wild or captivity.