The Alligator Gar is a type of fish that is very interesting. It is unique in appearance and falls into the category of a ray finned species. In various Indian cultures the scales of this fish have been used to create decorative types of jewelry and arrow heads. This is the largest of all freshwater fish found in North American. The males are about 10 feet long and the females are about 8 feet long. The males can weigh about 200 pounds and the females about 120.

The Alligator Gar is the only species of Gar that has a row of very sharp teeth that are in the upper jaw region. This is what gives the mouth the appearance of an Alligator and thus where the name derives from. This particular fish also has a very long snout. They are either dark brown, gray or olive colored. The body is covered with scales that are diamond shaped.

You will find the Alligator Gar living in bodies of water that are warm. They have been identified throughout the Southern part of the United States. They live in large lakes and small rivers. While they typically live in freshwater they have been found in small numbers thriving in saltwater. They are able to easily adapt to a variety of environments which is part of why they have been able to do well in spite of so many changes taking place all around them.

Sometimes you will see the Alligator Gar on land and that is something that surprises people. They have been known to survive on land for a period of time of up to 2 hours. They may be on land to look for food or to escape from predators.

For the most part they are timid and they will run away from danger rather than aggressively attacking. There are reports of them attacking humans but nothing that has been documented and verified. There are many humans that do go hunting this animal for the thrill of a dangerous hunt. 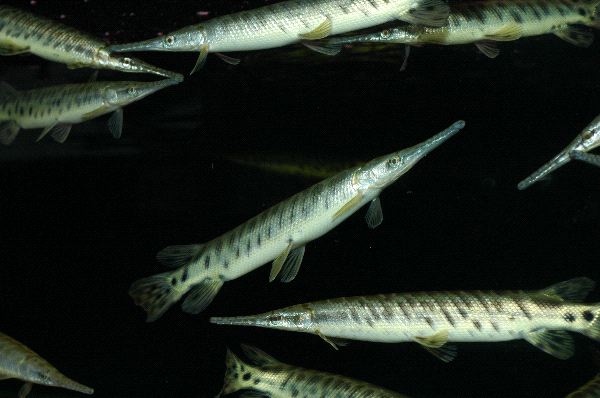 They blend in very well in the murky waters and that is why the Alligator Gar is such a great hunter. They tend to stay around the reeds and thick marsh so that they have a place to hide. Their prey doesn’t even know they are present until it is too late. They are meat eaters with huge appetites. They will take on prey that is much larger than them. They often get animals that come to the water to drink or to cross. They can go for several days without a meal. However, they will feed heavily when there is food available.

Mating for the Alligator Gar occurs in the spring time. They will mate due to the floodplains that often offers them more food resources. There isn’t a great deal known about their mating rituals. Mating takes place in the water and it isn’t known what draws a male and female to each other.

After mating the pair will go their separate ways. The female will deposit eggs and the young will emerge ready to take care of themselves from the very start. She will look for a hidden area that can protect them from being consumed as eggs though. Still, only a fraction of the young will survive to the age of maturity.

It can be tough to determine the age of an Alligator Gar. However, it is believed that in the right conditions in the wild, females they can live 50 years and males 26.