You may hear the African Penguin referred to as the Black Footed Penguin. They are very closely related to other species of penguins. This includes Magellanic Penguins, Galapagos Penguins, and the Humboldt Penguins. They look similar in appearance but there are enough genetic differences to further separate them.

This is a penguin that is about 26 to 28 inches tall. They weigh from 4 to 11 pounds. The males tend to be heavier and taller than the females. The males also have a larger beak than the females. They have spots on them that are very unique looking on the chest instead of it just being white. They also have a black stripe on the chest. Every one of these penguins has a unique pattern which can be used to identify them just like our fingerprints can identify us.

The water areas around Southern Africa is where this species of penguin is found. They are found living in colonies around 24 different island. They include Port Elizabeth, Algoa Bay, and Namibia. This is why the areas here are often referred to as Penguin Islands. Some of the colonies around Cape Town are prime tourist attractions of South Africa.

There are some mainland colonies found around Betty’s Bay and Boulders Beach. Those around Boulders Beach are very timid and often approach the people that come to this area. They tend to live close to the coast line. They will go to the rocky areas around the islands in order to rest. They will also do so during periods of mating and molting. 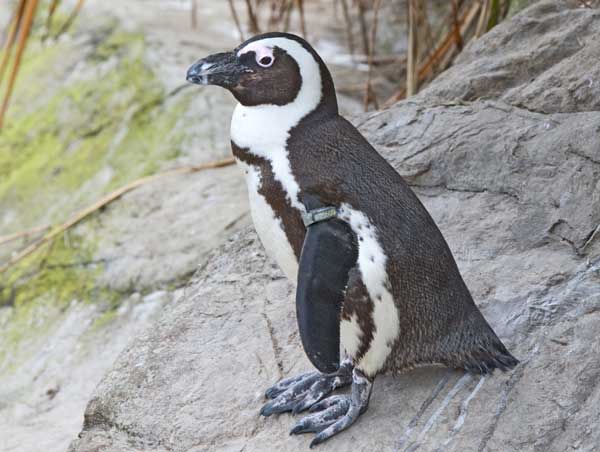 They make plenty of vocal sounds like other species of penguins. However, the African Penguin is one of the few that makes a sound similar to that of a donkey braying. These vocalizations allow them to identify their mate, to communicate with offspring, and to warn of any dangers. They are highly social and enjoy interacting with each other. They don’t seem to be very territorial.

They tend to spend their day time hours in the water swimming and finding food. The temperatures can be very warm during the day so they stay in the water to remain cool. At night, they tend to form very large groups on land. The body is very well designed to make swimming easy for them. They can move at high speeds but usually move slowly through the water unless they are in danger.

The process of preening is necessary for the African Penguins to keep their feathers in good condition. This process involves using the bill to take oil from a gland by the tail and distributing it among the feathers. This species is one that takes part in helping each other with the preening. It seems to be a big part of their social interactions with one another. During molting, the new feathers will be pushing out the old feathers. This process takes about 20 days and during that time, they will completely remain on land. This occurs between April and May in Namibia. It occurs from November to January in South Africa.

They will need to consume as much as they can so that they build up fat reserves. They can survive on them during fasting periods. When they are molting or when they are nesting they don’t return to the water for food. When they have young to care for, they will need to consume more food too so that they can bring some of it to shore for the young to thrive. 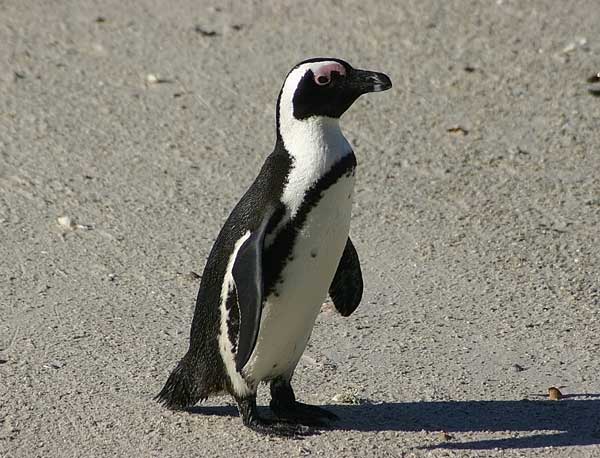 They are believed to be the only species of penguin that mate on the continent of Africa. They are believed to return to the same location annually for mating. There isn’t a set mating season though but location can play a role in it. Nesting seems to be very high in November and December around Namibia. In area of South Africa, nesting seems to peak from March through May.

It is common for pairs to mate with the same partner year after year. They rely on their vocalizations to find each other. For new mating, there is a display of sounds and body movements. The males will span their wings in order to look attractive. If a female is interested, she will start to mimic the male. They will then mirror movements in order to create a bond.

There can be competition at the nesting locations for the best spots. The males usually determine where the nests will be placed. The pair will work as a team to create a burrow in the sand or under some bushes. The female will usually lay two eggs in there and then the parents take turns incubating them for about 40 days.

The first egg is going to be considerably smaller, and that chick most likely won’t survive. The parents will spend their efforts focusing on caring for the larger and healthier chick. For the first 30 days, the parents will take turns finding food while the other cares for the young. After that time, both parents go to find food. The young chicks will stay in a group for about 130 days until their adult feathers come in.

There is a high mortality rate among the chicks during this stage. More than half of them won’t survive to be able to go into the water and get their own food sources. They have a vast number of predators on land including domestic cats, Kelp Gulls, and the Mongoose. These predators can cut the lives short of the vulnerable chicks. The average lifespan ranges from 10 years to 27 years for the African Penguin in the wild.