One of the medium sized birds out there is the African Gray Parrot. They are found in many locations and considered to be one of the prettiest birds out there. As a result they are often captured in the wild but in many places that practice has become illegal.

The African Gray Parrot is very beautiful. It has very short feathers with a light gray coloration. The area around the eyes is white or a light cream color. They also have white on their feet and under the belly reaching to the back of the body. The beak is black and pointed downward.

This bird lives in the rainforests throughout areas of Africa. They are mainly found in the Western portion of this continent. They use the hollowed areas of old trees to offer them solace and to create their nests. In areas where the dead trees have been removed it has caused a great loss of habitat for this bird.

The African Gray Parrot is considered to be one of the most intelligent birds in the world. They are able to problem solve and they are able to remember plenty of information. Experts have done various tests with them and they continue to be amazed at what this bird can learn to do.

They have a very gentle nature to them and they are among the Parrots with a grand ability to repeat and to learn words. They are often kept as pets due to their appearance, gentle demeanor, and the fun people can have with such a great companion. However, they do need a great deal of attention. They need to interact with a person, another bird, and with toys or they can suffer from high levels of stress. When that happens they can become destructive and they may refuse to eat. 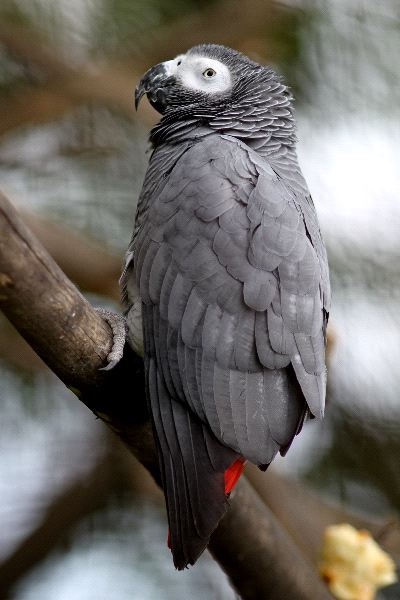 The diet for this Parrot consists of seeds, nuts, fruits, and leafy greens. They will spend a great deal of time in their habitat looking for food. Sometimes they will be seen eating snails.

There is still a great deal that we don’t know about mating in the wild. We don’t know what brings a particular male and female into the courtship rituals. The male often starts the process by making vocal sounds and dancing around. The female can choose to mimic the dancing and it will continue for several hours. The other option is she can decline any interest in him and keep looking for another mate. The are particular about who they mate with because they will stay with the same mate for life.

Breeding doesn’t always occur during the same time of year which brings experts to believe it has to do with habitat and availability of food. When the African Gray Parrot has those items it is more likely to mate than under stressful living conditions. The  pair will create a large nest where the female will place up to 4 eggs.

Within a couple of months the chicks will arrive. Both parents will care for them and bring them food. They can fly when they are about 3 months of age. However, they will remain with the parents until they are about 6 months old.

While the numbers aren’t too low right now for the African Gray Parrot, experts believe that 21% of the population may be taken from the wild annually. This is due to people capturing them to sell on the market due to the demand for them in the pet trade. It is also due to a loss of their habitat.