Of the two genus of elephants, the African elephant is perhaps the most iconic. Portrayed as remarkably intelligent ‘gentle giants’ – albeit ones with a well-known ability to wreak havoc and seek revenge when necessary – elephants are amongst the most beloved animals in the world, and for centuries have been used as everything from weapons to status symbols to devoted pets to circus performers. Their mental acuity and seemingly loving natures have won them a place in the hearts of many.

Despite this, they are sadly classed as ‘vulnerable’ by the IUCN. Elephants have few natural predators, but slaughter, poaching, hunting and the destruction of habitat – all of which have been wrought upon them by humankind – are threatening their future and survival. Thankfully, efforts are being taken to prevent these attacks – but the damage is far from reversed. Trophy hunting is still a common problem, and the now-illegal ivory trade still thrives in some parts of the world. CITES considers African elephants to be threatened with extinction, and cautions that there could be no more living in the wild in as few as ten or twenty years.

What makes this even more tragic is the knowledge that elephants are thought to be in some ways as intelligent and conscious as humans. Along with a few types of primate and a few types of cetaceans, elephants are amongst the species occasionally argued to be deserving of personhood and a bill of rights similar to our own.

African elephants are the largest land mammal still extant. They have been known to reach anything up to 13ft in height, and the average male is around 13,000 lbs in weight – with many being considerably heavier. They have remarkably large ears and a long, flexible trunk that they can use to manipulate things and interact with the world around them as well as to make their signature ‘trumpeting’ sound. Their tusks are larger than those of an Asian elephant, and continue to grow throughout the elephant’s lifetime – and, again unlike their Asian counterparts, both male and female African elephants possess and make frequent use of these tusks.

Discolouration of the skin is less common amongst African elephants than Asian, but does still happen from time to time – particularly around the head. Their skin is tougher and rougher than that of an Asian elephant, and their larger size renders their feet far less agile and useful. 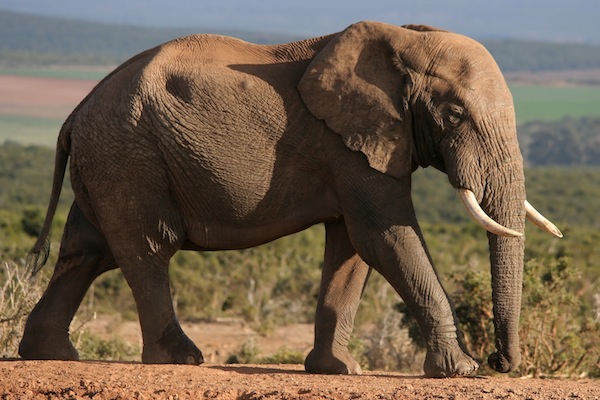 African elephants are found in small numbers in many different parts of central Africa, though it is thought that they have almost entirely died out in the countries to the North and South of the continent. They are extremely versatile animals, able to live in many of the diverse kinds of territory and habitat found in the various parts of Africa. African elephants can be found in dry forest, in rainforest, savannahs, in lush grassland and in near-desert – amongst various other places.

They can be kept in captivity with relative ease, but elephants appear to be easily intelligent enough to suffer from mental health disorders – insanity has been known to afflict elephants who are not kept with sufficient care and in an environment close enough to their own.

Elephants are, by and large, social animals – though there are exceptions. The typical elephant herd is led by a ‘matriarch’ accompanied by her sisters, daughters, nieces and potentially granddaughters – and their calves. The matriarch decides the route the travelling herd will take to find fresh food, and she makes sure that every elephant with her is shown every water source she knows of – meaning that they all memorise these for future use.

While these individual units are relatively small, they blend together from time to time – meaning that one occasionally finds a hundred or more elephants living together, though eventually they are likely to split back up into their family groups. Fully matured male elephants will occasionally travel with these herds, but they are more likely to live solitarily nearby.

African elephants form strong social bonds. When a female gives birth, the rest of her herd – and other elephants who know her – will touch her gently with their trunks to acknowledge the feat, as well as helping to care for the newborn calf. Male elephants always greet their relatives warmly if they encounter each other on their travels, despite the fact that they may not have seen much of them for decades.

When an elephant dies, other elephants who knew them stay by the corpse. If they come across the carcass of a stranger, they will form a huddle around it and touch its forehead respectfully with their trunks.

The eating habits of the African elephant are almost legendary. These creatures require something in the region of 375 lb of plant matter and 150-200 L of water every single day of their lives, and as such cause remarkable devastation if found near cultivated crops. In their natural habitat, however, these needs are in fact beneficial to local flora and fauna – their dung aids in seed dispersion, meaning that many of the different kinds of plants found in elephant habitat thrive beautifully.

They are strictly herbivorous, but will eat pretty much any kind of organic matter. There is some evidence that elephants have a particular liking for the fruits to ferment into alcohol before eating them.

It’s thought that starvation is the number one cause of death amongst elephants. They can have anything up to six distinct sets of teeth throughout their lives, shedding them and growing new sets every ten to fifteen years, but after the final set has fallen out no new teeth will grow – meaning that eventually, unable to feed itself sufficiently, the elderly elephant will starve to death. ‘Elephant graveyards’ are a myth, but it is undoubtedly true that elephants are amongst the only animals to observe death rituals. 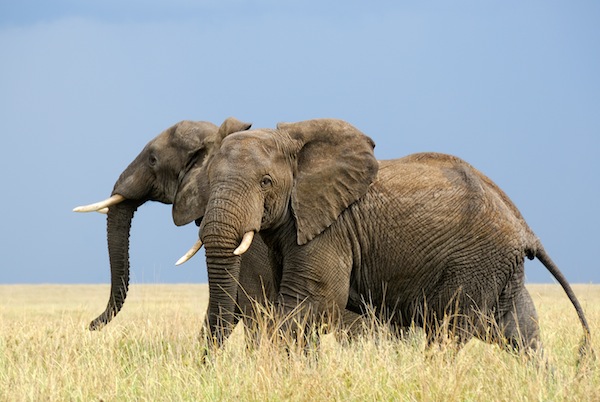 When a female elephant is ready to mate, bull elephants living solitarily in the surrounding area begin to congregate around her herd. They fight each other for the privilege of copulating with her, and although she usually does choose the victor it is ultimately her decision with whom she conceives – she indicates her choice and acceptance by rubbing her body against his. Should she reject the fight’s victor, the remaining males fight again until a decision has been reached that suits everybody.

After a gestation period of nearly two years, the female elephant will birth a single calf. The baby can walk after just a day or two and begins eating solid food at six months, but will supplement his or her diet with mother’s milk right up until the age of five.

Young elephants reach sexual maturity sometime in their teens; usually around thirteen or fourteen years of age. At this time, juvenile males will usually split off from the herd and live in a ‘bachelor group’ with other young males for a time – though by the age of nineteen or twenty, the vast majority of bull elephants will be living alone. Females tend to remain with their mother’s herd, usually until death.