The African Clawless Otter is the second largest of all freshwater species. They are well known for the luxurious hair that they have. It is very silky in appearance as well as to the touch. As the name suggests, these Otters don’t have claws. They have a head that is larger than the other species of Otters which is a distinguishing characteristic when you see them in photos or books.

They are found in freshwater and marine habitats, typically close to the forest areas along various areas of Africa. They thrive both in the warm water areas and where the temperatures are very low. They tend to like water that is surrounding by areas of foliage.

They love to play too so you can find them using logs and other items in their environment to have fun with. They spend a great deal of their time laying around in the sun or even in the shade. Night time is when they tend to be the most active and when they search for food.

They tend to either live alone or in small groups of about 6. Their raft has a given territory and then they each have their own space within it. They mark their territory with their scent glands which are very powerful. 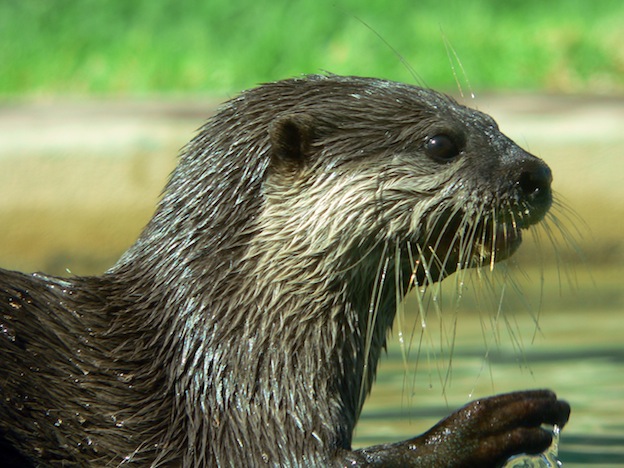 Their diet generally consists of a variety of small items including frogs, worms, fish, and crabs. They are very fast when it comes to catching these items and then consuming them. They tend to take food that they catch in the water to the shore to consume it though. They are avid hunters, even looking under logs and rocks for creatures that they can eat.

They use their whiskers as the primary source of finding food. These whiskers are highly sensitive to vibrations all around them. They rely on them both in the water and on land.

These Otters are mature enough for mating around one year of age. They tend to mate in December as that is the rainy season in Africa. The sexes are separate until they mating season occurs. They immediately go their separate ways afterwards as well. It takes about 60 days from conception and the litters may be formed by one or 5 pups.

They are only nursed by their mother for about 60 days. During this period of time they will be taught to swim and to fish. The are considered to be full grown at about one year of age. At that time the males will leave their mother to join the male raft in the area.

This species of Otter is Least Concern in Conservation status, but they are hunted by humans and their habitat is destroyed. In some parts of Africa they are protected but it isn’t a widespread effort like it needs to be.

Humans that are trying to capture fish in nets tend to be a huge threat to the African Clawless Otter. The fact that so many fish these areas means that the food supply can be significantly reduced for them as well. Many still hunt them in Africa for their pelts as well.