Many people find the name of the Adelie Penguin to be the most unique and beautiful of all of the species. Their name stems from the wife of the explorer Jules Dumont d’Urville. Her name was Adele and this French explorer was the first to document these penguins in 1840.

They are considered to be medium sized when compared among all 17 species of penguins. They range in weight from 8 to 13 pounds. They range in height from 18 to 30 inches. Typically, the females are a bit smaller than the height and weight of the males. One of the distinct features of the Adelie Penguins is that they feature white rings around their eyes. They also have feathers present at the base of the bill.

The bill is a red color, but due to the presence of these feathers it is hard to see that coloration. They also have a tail that is a bit longer than most species of penguins. The overall appearance of the body is slender and streamlined, and they do have that typical tuxedo like appearance that penguins are so well known for. This includes the belly being white in color. Their body helps them to have camouflage in the water.

You will find the Adelie Penguins living all along the coast of the Antarctic. There are 38 known colonies with a population of approximately 5 million. The Ross Island population is very large and accounts for a large portion of their overall population. They spend their winters in this location too along the ice pack. They may be long distances from the coast. However, they will migrate to the coast in order for mating to take place. 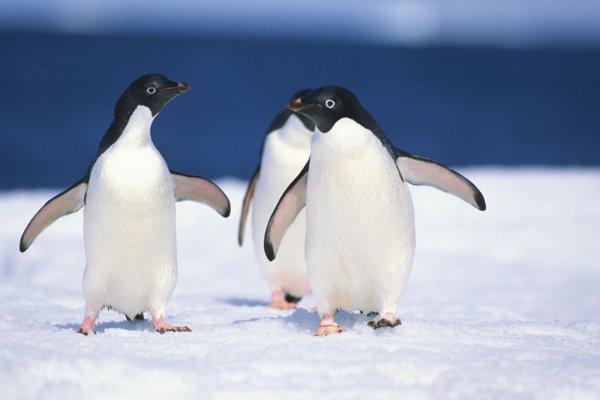 Adélie Penguins in Their Natural Habitat

This is one of the fastest known species of penguins when it comes to swimming. They have been identified as being able to swim up to 45 miles per hour for short periods of time. They are excellent swimmers and can do so for long periods of time. They don’t seem to use up very much energy for movements in the water either.

They are very social penguins, and use a variety of vocalizations to communicate. They will also use those vocalizations to assist them with finding their mate, attracting a mate for the first time, communicating with their young, and with warning about potential dangers. They can also be very aggressive towards each other. One of the common conflicts among them is stealing stones that they rely on to successfully build their nests during mating season.

This is the only species of penguin that can take part in porpoise. This is a process of being able to shoot out of the water a few feet before they land back into it. They may do this to quickly get air. They are also able to get around with a variety of methods. They can waddle on land, they can jump, and they can also slide along the ice and snow on their bellies. Preening is a process that all penguins must take part in.

This allows the oil from a gland by the tail to excrete the substance onto their bill. Then they are able to peck all over their feathers to disperse the oil. This is one species of penguin that has been seen helping each other to complete the process. Not only does it help to keep the feathers intact for water proofing and for insulation, but it also serves as a way for them to fulfill their need for social bonding.

The majority of their diet consists of krill. They will have access to go food through the sea ice. They will also dine on plankton when it is offered. They will have to build up layers of fat in order to successfully fast during mating season and during molting season. They tend to hunt in groups too which is believed to assist them with rounding up the fish. It could also be a means of helping them avoid predators due to safety in numbers.

They rely on barbs that are coarse in the mouth and on the tongue that help to ensure that the slippery food sources don’t come back out. They swallow their food whole so they have to make sure what they take in is small enough that it won’t get stuck in their throat. These penguins are very skilled about finding air holes. However, when they come up for air when they jump from the water, they could find a predator patiently waiting for their own dinner to arrive. 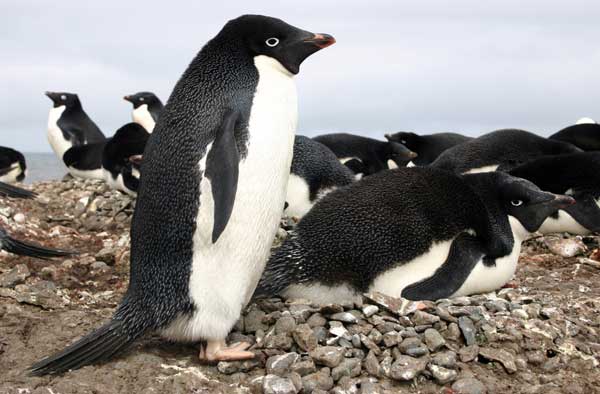 The Adelie Penguin is mature around 6 years of age. Mating occurs in the months of October through February. The males will secure the best nesting sites that they can. There can be plenty of fighting among the males for this ability. They know that the ability for the young to survive is dependent upon location. The new males to mating also will find they have an easier time getting a prime female if they have a good nesting location.

The Adelie Penguins will make with the same partner annually when possible. They will be able to use their vocalizations to successfully call out to each other and find them even in large populations. The young males that need to find a mate will call out and do what they can to display their body in order to get a female’s attention. He will know she is interested when she starts to copy his movements.

As a team, the pair will work to create a nest. The nests of the Adelie Penguins are made from stones and various types of debris that they can find in their habitat. They will only build them on areas that are free from ice.

Once the nest is constructed, the female will deposit two eggs into it. These eggs will be significantly different in size. The first egg will be much smaller than the second one. The smaller chick will  have virtually no chance of survival. The parents will focus their attention on the healthier and larger chick to help it to survive. Due to the cold region where these penguins live, it is very important that the parents do all they can to offer adequate shelter. That all starts with a very good location for the nest.

The parents will take turns incubating the eggs for a period of 32 to 34 days. The shifts are going to last for approximately 12 days. Once the chicks emerge the parents will alternate caring for them and bringing them food. After about 3 weeks, both parents will go to forage for food and bring some back. The young will all be in a group and there is a high mortality rate during this period of time.

The young won’t feature feathers that are water proof until they are about two months old. Only then when they be able to get into the water and to find food on their own. Instinctively, they will know how to swim and how to find food. The various predators of the Adelie Penguins include the Skua, Orcas, and Leopard Seals. The average life span for this penguin in the wild is 16 years.